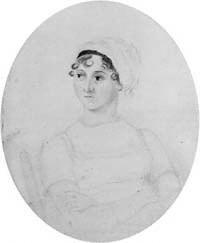 Jane Austen was born on December 16, 1775, in Steventon, Hampshire, England. While not widely known in her own time, Austen's comic novels of love among the landed gentry gained popularity after 1869, and her reputation skyrocketed in the 20th century. Her novels, including Pride and Prejudice and Sense and Sensibility, are considered literary classics, bridging the gap between romance and realism.

The seventh child and second daughter of Cassandra and George Austen, Jane Austen was born on December 16, 1775, in Steventon, Hampshire, England. Jane's parents were well-respected community members. Her father served as the Oxford-educated rector for a nearby Anglican parish. The family was close and the children grew up in an environment that stressed learning and creative thinking. When Jane was young, she and her siblings were encouraged to read from their father's extensive library. The children also authored and put on plays and charades.

Over the span of her life, Jane would become especially close to her father and older sister, Cassandra. Indeed, she and Cassandra would one day collaborate on a published work.

In order to acquire a more formal education, Jane and Cassandra were sent to boarding schools during Jane's pre-adolescence. During this time, Jane and her sister caught typhus, with Jane nearly succumbing to the illness. After a short period of formal education cut short by financial constraints, they returned home and lived with the family from that time forward.

"A defining characteristic of Jane Austen’s fiction is its realism, which is manifest in details of speech, manner, lifestyle, and even geography.  In each novel her “3 or 4 Families in a Country Village” are situated in a specific part of England.

Sense and Sensibility, her first published novel, begins, “The family of Dashwood had been long settled in Sussex.” Austen uses the removal of the Dashwood women from Norland Park in Sussex to Barton Cottage in distant Devonshire to underscore both their exile from a cherished home and their displacement from an established social position to a modest life among strangers." (from http://www.jasna.org/info/maps.html )

"Austen always names the county in which a novel’s action is set and often mentions cities and landmarks, though her villages and estates are invented.

This section reproduces maps of the novels from Where’s Where in Jane Austen . . . and What Happens There, by Patrick Wilson, published by the Jane Austen Society of Australia.  Jane Axelrod, a JASNA member in the Metropolitan New York Region, created the map of London." 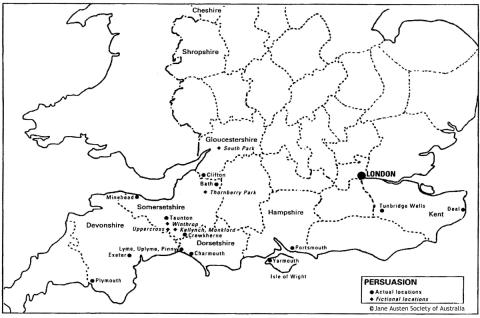 Ever fascinated by the world of stories, Jane began to write in bound notebooks. In the 1790s, during her adolescence, she started to craft her own novels and wrote Love and Freindship [sic], a parody of romantic fiction organized as a series of love letters. Using that framework, she unveiled her wit and dislike of sensibility, or romantic hysteria, a distinct perspective that would eventually characterize much of her later writing. The next year she wrote The History of England..., a 34-page parody of historical writing that included illustrations drawn by Cassandra. These notebooks, encompassing the novels as well as short stories, poems and plays, are now referred to as Jane's Juvenilia.